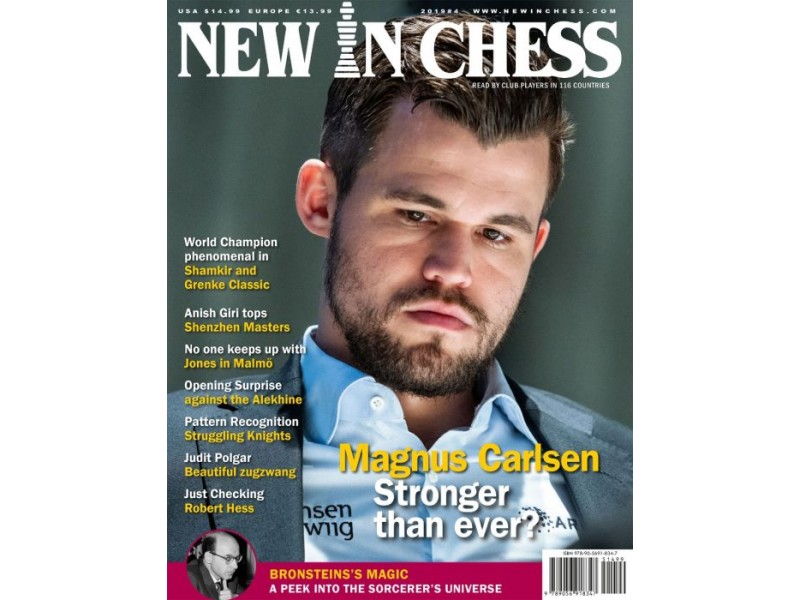 8 Banned & Back
With 15 GMs (and counting) Iran is experiencing a mini chess-boom.

10 NIC’S Café
Can you make music based on the rules and strategies of chess? Karpov Not Kasparov certainly believe so.

13 Your Move
More memories of William Lombardy and of young and old Sammy Reshevsky and his character.

14 The Emperor Strikes Back
Those who were daydreaming that the gap between Magnus Carlsen and his closest rivals was closing, are wide awake again. With phenomenal victories in the Vugar Gashimov Memorial and the Grenke Classic, the World Champion demonstrated that he continues to be in a class of his own.

36 Giri wins Shenzhen Masters
Pentala Harikrishna seemed on course to win the third edition of the Shenzhen Masters until he stumbled in the last round and was overtaken by Anish Giri, the only player who went undefeated.

54 Bronstein’s Magic
Inspired by his wife and the modern classic The Sorcerer’s Apprentice (or vice versa), Mihail Marin tries to find out what made David Bronstein’s genius so special.

64 No one keeps up with Jones
Gawain Jones once again proved that he’s become a consistent 2700-player, as the Englishman deservedly won the jubilee edition of the TePe Sigeman tournament.

74 Judit Polgar
When it’s your move and you wish it weren’t. Or, in perfect English: zugzwang!

82 The Blitz Whisperer
Maxim Dlugy contends that the new rising grandmasters have weaknesses in their endgame to work on.

92 Sadler on Books
New books, ranging from an entertaining collection of exercises to a wonderful memoir by the first wife of the great Mikhail Tal.

96 Carlsen reigns supreme
The World Champion’s devastating campaign in the Gashimov Memorial and the Grenke Classic also made a deep impression on Jan Timman.

106 Just Checking
What was the best piece of advice Robert Hess ever got?