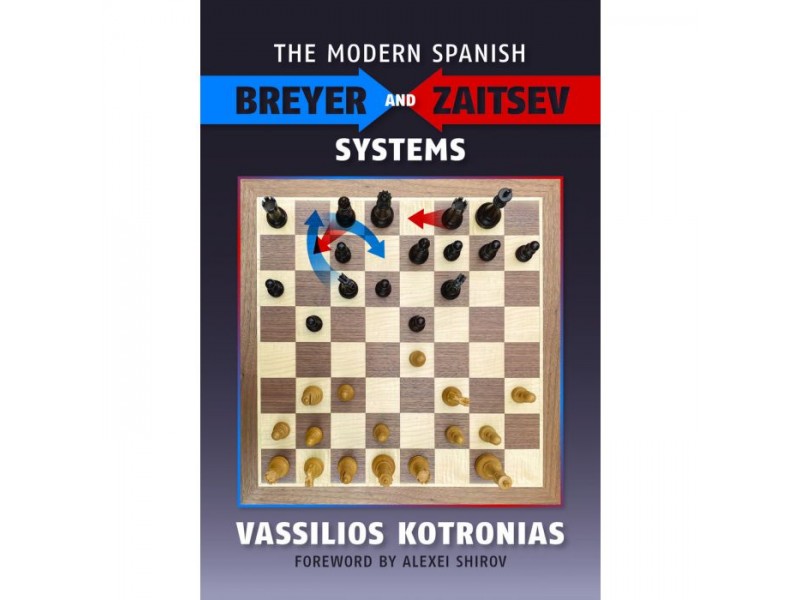 The Breyer and Zaitsev Variations of the Ruy Lopez are two of the most dynamic lines played today. Examining them from both White and Black’s point of view, Greek grandmaster Vassilios Kotronias discusses their strengths, weaknesses and presents suggested improvements where necessary.

The Breyer Variation of the Ruy Lopez is the brainchild of Hungarian hypermodern Gyula Breyer. He suggested the paradoxical knight retreat 9...Nb8 early in the 20th century. Although its soundness has been confirmed in many grandmaster games for over a century, there is surprisingly little which has been written about it. This book has just changed all that.

The Zaitsev Variation was one of Anatoly Karpov’s workhorses in his title matches against Garry Kasparov. Formulated by the brilliant theoretician Igor Zaitsev, it can be found in the repertoires of some of the leading grandmasters of our era.As the author notes in his introduction, this is an objective presentation of two excellent opening variations for Black, from which players sitting on either side of the board may profit. The play is strategically complex, tactically rich and will improve you as both a player and connoisseur of the game.

Kotronias’ clear writing style, coupled with in depth analysis, makes for a splendid opening manual on two of the most topical – and solid – variations of the Ruy Lopez.

"Vasilios Kotronias has managed to not only teach us (myself included) some important theory and practice of the Breyer and Zaitsev Systems, but also broaden our horizons to our approach to chess in general. His explanations are quite clear and the lines he provides are logical and concrete. This new book is aimed for all ages and chess levels. Welcome to the fascinating world of Breyer and Zaitsev!" -- Alexei Shirov, from his Foreword