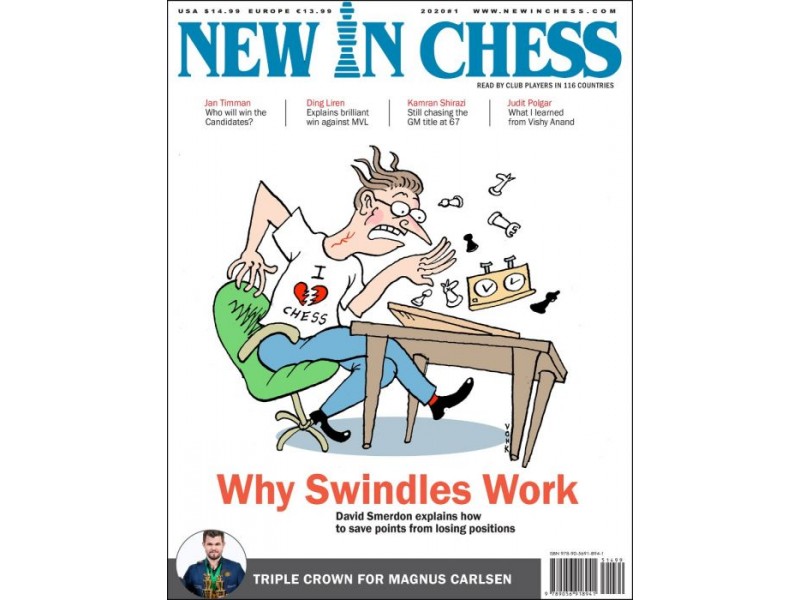 Jan Timman looks at the eight Candidates and weighs their chances.

100 Who will challenge Magnus?

99 They Are The Champions

Our reviewer loved The Anand Files and tells you which other books he’s been reading.

The bishop pair taking aim at the king can be a lethal weapon.

Maxim Dlugy tells you what his favourite blitz openings are and why.

84 Openings that save time

Alexandra Kosteniuk strikes in a nail-biting final round.

The happy winner increased his total earnings in the Grand Chess Tour to an imposing $294,833 and showed once again why he is one of the clear favourites in the Candidates tournament.

Born in Iran, he became a household name for unorthodox, wildly creative chess on the American circuit. Now he lives in France. At 67, he is still chasing the GM title.

Alexander Grischuk secured qualification to the Candidates watching from his home. Next a second Russian joined him as Ian Nepomniachtchi dashed the hopes of Maxime Vachier-Lagrave.

A swindle is not about luck, David Smerdon argues.

38 The art of swindling

Did Bent Larsen regret that he never had a trainer?

The King Salman World Rapid and Blitz Championships in Moscow ended in another triumph for the Classical World Champion. In the Rapid Magnus Carlsen outshone his rivals, in the Blitz he disposed of top-seed Hikaru Nakamura in the tiebreak.

David Navara reveals an amazing stalemate trick. And what do you think of Italian free castling?

A winner takes all. For a short moment, Magnus Carlsen topped the Fantasy Premier League rankings. And check out the ‘Ukraine Immortal’.

8 The life of leisure

When was the last time John Bartholomew cried?